Posted on May 29, 2014 by info@debbiewilliamsassociates.co.uk

Fear of eating or trying new foods is quite a common problem. It can range from a vegetarian choosing not to eat animal products to full blown restricted diets.

Clients of Birmingham NLP hypnotherapist have had diets where only ”white food” i.e. bread, pasta white meat ( chicken) and potatoes are only eaten.  One client lived on just chips and crisps.

Most food phobias and fear of eating can be traced back to childhood. Its a time when the child is learning to assert themselves, hold their ground and to stubbornly demand things.

One adult client remembered being able to say no to all fruits and vegetables at aged 4 or 5  His parents were going through a divorce and through our sessions, looking back he realised his mother allowed him to get away with it as she felt pain and guilt that her child no longer had his father at home.

He remembers being angry towards his mother for letting daddy leave and would have massive tantrums and feign being sick when trying to eat ”her food” and unfortunately growing up that fear became a reality.

Working with children who have food phobia’s

Birmingham NLP hypnotherapist prefers to work with the parents first to empower them with strategies to help their child.

The video below may help. If you need any more help get in touch. More videos about food phobias and fear of eating on Debbie Williams’s website

Food phobics and those who have a fear of eating new food usually end up having some of Birmingham NLP hypnotherapists self help programmes below.

Also those who have children with a fear of food can benefit from the parents listening to the recordings as it empowers them to have the confidence to set up some structures involving rewards for putting minuscule amounts in their mouths and not even having to chew.

Animal trainer Karen Prior who wrote ”Don’t shoot the dog” realised you could only use the carrot with training dolphins as the stick made them swim away.

She would give them jackpots of fish to gain their trust and curiosity and then gradually reduce rewards so that they would have to do 2 or 3 repetitions of a behaviour before they got the fish.

This in dispersed with the odd jackpot got the dolphins behaving like a gambling addicts as they kept coming back to try their luck.

We can model some of this for children by waiting until they want something and telling them they can have it if they put the ‘said’ item of food in their mouth for 1 minute ( small as a quarter of a pea) and they don’t even have to chew.

At first it is a slow process but it does build up momentum over a few months and its time well spent as its them making decisions. To book a session with Debbie in Birmingham or over Skype call 0121 241 0728 or visit www.debbiewilliams.co.uk 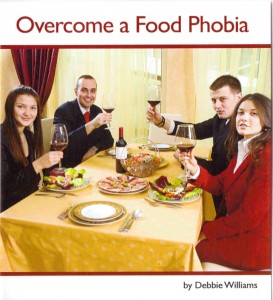